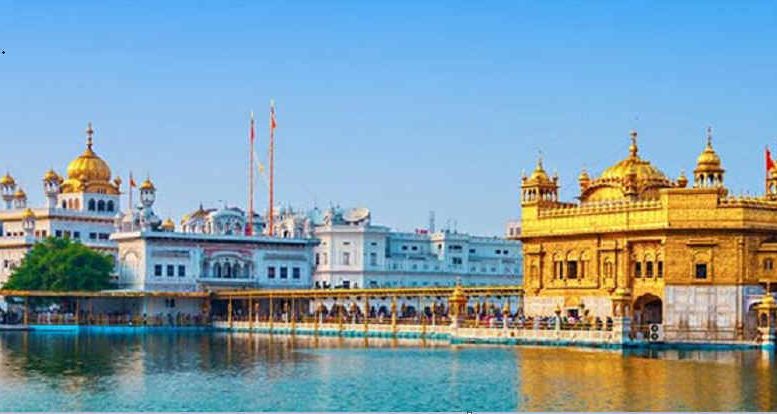 Amritsar Tour
AMRITSAR: The home of the world famous Golden Temple, 450 years old city of Amritsar, the most important seat of Sikh history and culture, situated on north western borders of the country.

Amritsar is the Gateway to India for travellers coming the overland route through Pakistan. It is founded in 1579 by Guru Ram Das, the fourth Guru of the Sikh faith. He constructed a pool on a land gifted by Mughal Emperor Akbar and called it ‘Amritsar’, the Pool of Nectar, giving the city its name.

After lunch visit Wagah Border to witness the closing ceremony between both countries i.e. Hindustanis and Pakistanis.

Dinner in hotel. After dinner visit Golden Temple to witness closing ceremony of Granth Sahib, Sikh holy book being carried to its night lodging by a palanquin.
Overnight in hotel.

THE GOLDEN TEMPLE: A glittering gold and marble temple, is one of the holiest Sikh shrines. Within the temple interiors are elaborately worked with fine inlay work done with semi-precious stones. During Maharaja Ranjit Singh’s reign the lower half of the temple was decorated with marble while the entire upper half was inlaid with copper covered over by gold plate. Hence its new name Golden Temple. Free kitchen and recitation of the divine word never cease here. Its four gates invite everyone from all directions.

AKAL TAKHAT: Sixth Guru Sri Har Gobind had got it constructed a a seat of temperal authority symbolising the unity of spritual and temporal life in 1609.
Jalianwala Bagh and Durgana Temple.

Early in the morning transfer to Railway Station.
Our Representative will meet you at the Railway Station and transfer you to the International Airport to catch flight for final departure from India.